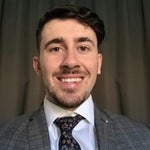 Sean, a native of Ireland, is the firm's International Legal Specialist. His areas of practice include white collar defense, federal criminal defense, and international commercial litigation. As part of his work since joining the firm, Sean has had a key role in trial preparation and legal research on federal criminal cases arising out of the Southern District of New York, including major white collar criminal cases, conspiracy, and RICO cases.

Prior to joining Fasulo Braverman & Di Maggio, Sean worked at the Philadelphia District Attorney's Office as part of an LLM Program of Temple University. He also interned with the Hon. Charles J. Cunningham III in Philadelphia, who presided over state criminal and civil matters. In Ireland, Sean worked with a large, multidisciplinary firm where he served as a summer associate for a partner, focusing on commercial, criminal, and malpractice litigation. He is admitted to practice in New York State court and federal district court for the Southern District of New York.