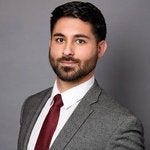 An associate of the firm, Michael's areas of practice include white collar defense, commercial litigation, and real estate transactions. He represents individuals subjected to government investigations or charged with a federal offense. He also represents plaintiffs and defendants in matters related to contract or business disputes. Prior to joining the firm, Michael was an honors extern at the Westchester County District Attorney's Office. He interned for the Honorable Judge Travis L. Francis, A.J.S.C., New Jersey Superior Court, where he worked on matters including commercial general liability coverage, commercial litigation, and administrative appeals.